The fisher, other common names for which are fisher cat, black cat, and pekan, prefers a habitat of large tracts of coniferous or mixed forest. Consequently, the expansion of farming and the heavy logging in Connecticut through the 1800s saw a precipitous decline in its population. In addition to habitat loss, the fisher was trapped for its pelt; by 1900, the fisher was absent from Connecticut.
While there remained a small population in Western Massachusetts, it was isolated from appropriate habitat in Connecticut and its range did not expand southward. That changed in 1988, when fishers trapped in New Hampshire and Vermont were released in western Connecticut. They have since spread to the eastern part of the state. Their recolonization was successful enough to warrant regulated trapping, beginning in 2005. 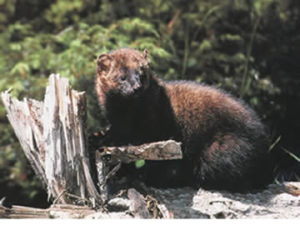 Fishers typically choose tree cavities when ready to bear young—and usually given birth in March or April to two to four kits. Generally weaned by August, observations suggest that the kits are cared for solely by the female through that time. Within two years, females can bear young, though the kits are sexually mature within a year of birth.
As it rarely eats fish, “fisher,” may seem a misnomer. The name fisher likely came not from its diet, but from the French pronunciation of the word for the pelt of the polecat, “fiche,” “ficheux,” or “fichet.” Its diet includes squirrels, rabbits, mice, voles, carrion, fruits, mast, birds, frogs, and, most notably, porcupines. Porcupines have a number of predators, but none quite so well adapted—or so successful—as the fisher. The fisher’s success with porcupine can be attributed to its face “punching” strategy, which it accomplishes with its front paws. It will also bite the face, given the opportunity.
Humans rarely see fishers. Secretive and alert, they are normally a nocturnal animal and typically solitary, with the exception of mating season, a brief stint in the spring some few weeks after birthing. In addition, they avoid open areas and range an average of 4 to 8 square miles of forestland, depending on the quality of the habitat.
Sources: CT DEEP, “The Fisher” by Robert Powell, 1993.  Photo from Wikimedia commons
Originally published in the ECFLA/WDLT newsletter, Volume XXXIV, No.1, Spring 2011
Bet Smith2020-04-07T13:16:14-04:00Animals, Articles|