The Rad Ostby Memorial Forest is being logged. That’s right – logged. In January of 2003 Wolf Den Land Trust contracted with Connwood Foresters, Inc for the purpose of preparing a ten year forest management plan for the Ostby Forest . Data collected during the forest inventory revealed an over mature and stagnant forest. Due to the dense canopy closure, diversity of the structure of the forest was minimal. Ideally, there should be three size classes present in the forest – seedling/sapling, poletimber, and sawtimber. The majority of the Ostby Forest contains only mixed oak small sawtimber. Unfortunately, this forest is of an advanced age and showing signs of decline in health, vigor, and quality. This affects not onlRad 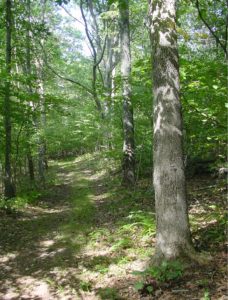 Ostby Memorial Foresty the economic value of the forest but the ability of the forest to produce food for wildlife and to reproduce itself as well. It was time to weed the garden.

The forest management plan called for a combined crown thinning and improvement thinning on approximately 40 acres. These types of thinning are considered intermediate treatments. Intermediate treatments can be commercial or non-commercial in application. The separation depends upon the size class, volume, and quality of trees to be removed. In a crown thinning trees are removed from the upper crown classes in order to open up the canopy and favor the development of large and promising overstory trees. Most of the trees that are cut come from the codominant class, but any intermediate or dominant trees interfering with the development of potential crop trees are also removed. The trees to be retained are primarily dominants and, occasionally, codominants. In an improvement cut, which is frequently applied in conjunction with a crown thinning, trees with little present or future value for timber, wildlife, or other management objectives are removed from the stand in order to provide additional growing space to the remaining trees. The data collected during the forest inventory revealed that approximately 53 mbf (thousand board feet) could be removed in an intermediate treatment. Based on current local sawtimber markets the value of this timber was estimated to be $7,900.00.

In June of 2003 Connwood forestry personnel began flagging the wetlands, laying out skid and haul roads, locating the log landing, and marking the timber. Four hundred and fourteen sawtimber trees as well as three hundred culls were marked for removal on the forty acres. This averages out to 18 trees per acre. The volume of marked trees totaled 52 mbf and 44 cords of firewood. One June 27, 2003 twelve prospective timber buyers were invited to view the timber and submit bids. Of the twelve invitees, four attended the showing and submitted bids prior to the July 11, 2003 deadline. When the bids were opened the decision was made to award the timber sale to Hull Forest Products of Hampton, CT. Hull Forest Products plans on starting the harvest in August and may actually be working the property as you read this. Please look for updates on this harvest and future forestry activities planned by The Wolf Den Land Trust in future ECFLA Newsletters.

This article originally appeared in the September 2003 ECFLA/WDLT Newsletter.