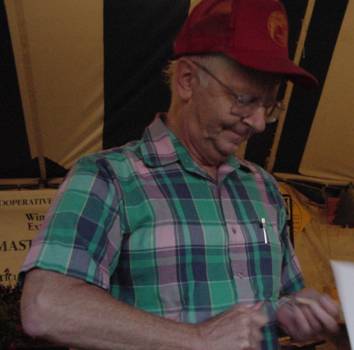 I thought my task would be fairly easy to write an article about the death of Bob Smith: just put down all the great things he did for ECFLA/WDLT, write about what an interesting guy he was, and say good bye. It wasn’t that easy. I kept putting it off. And, I felt inadequate for the job.

I knew Bob for a few short years. I was one of his many friends and acquaintances, all of whom are better for that acquaintance. I met Bob at an Eastern Connecticut Forest Landowners Association, or “ECFLA” meeting, as Bob referred to it. Very quiet guy it seemed. He sat there taking notes, occasionally making a point, writing some more, and laughing a couple of times. Then it was time to go home. It turns out that “quiet guy” was making noise, in good old-fashioned, productive ways.

Secretary, note taker, keeper of information, and historian of the organization: Bob was all of those. Minutes, short and to the point; comments at our meetings, and comments about the meetings – all significant contributions. Ouch! Bob was capable of some pretty good zingers, said with the hint of a smile. We will miss you.

Avian architect, builder of bird houses, protector of small warm creatures: Bob was all of those. “Blues and bats” as Bob would say, were probably his most apparent contribution. Over the last ten years or so, thousands of bluebird boxes and bat houses, sold mostly at the Brooklyn and Woodstock Fairs, but also at nearly every event ECFLA/WDLT sponsored . They can be found here and there over much of New England. Not just bird houses, mind you, but instructions, illustrations, and the screws to put them up with: typical examples of Bob’s attention to detail. We will miss you.

Friend of the forest, steward of the land, caretaker of the environment: Bob was all of those. Bob cut trails, labeled trees and other interesting features, assisted in forest management, covered old wells, made bridges, put up bird houses, created wooden signs, cleaned up trash left by insensitive users, fretted over ATV use of trails, and had an enthusiasm for marking trails with his own special colored paint that would take your breath away. We will miss you.

Fair display organizer, display maker, publisher of information: Bob was all of those. How Bob squeezed all that stuff in his car and got it to the different fairs always amazed me. Steve and Ruth could probably tell you because they helped a lot. Trudging up and down the stairs of the air conditioned splendor of the Brooklyn Extension Service attic was a job in itself, not to mention keeping track of all the display items. There were printed materials, wood species display, gadgets for holding paper handouts in place, the bat house display with a real bat inside, (well actually, a miniature baseball bat), occasionally a leaf display with accompanying water vials, and other down to earth items and ideas. Setting up the displays, especially the cord wood raffle, was a classic “Bob operation”. “Where do you think we should put it?” Bob would say, and after a discussion would start measuring out exactly a four by eight foot space, with the supports exactly at the intervals he thought were proper, and the driving of said supports down so as to have exactly four feet above the surface of the ground exposed. As the wood was taken off the truck there would be several instructions as to how to place the wood. “Good side up” was a pretty common comment; “Show off the best side for the raffle.” We will miss you.

Seller of Christmas trees, groomer of the grove, fixer of the tractor: Bob was all of those. Bob helped organize the annual Christmas tree sale so generously donated by Lelia Ostby each year. He called for volunteers, found saws to cut the trees, brought a few bird houses to sell, made a few more signs, and sold a bunch of trees. It was all the preparatory work that took place earlier in the year at Lelia’s Christmas tree farm, that really told the story of Bob. Bob mowed the grass between the trees, trimmed trees, cut stumps left by satisfied tree buyers, culled out dead trees, ran the Kubota like an expert and on occasion serviced it too. It was on those stump-cutting afternoons that I got to know Bob best. We’d get together, start cutting stumps, figure out where to put them, get the tractor out of a hole, discuss why the trees looked the way they did, and talk, sharing the common bond of the environment. I tried to understand Bob’s understated manner, his incredible energy, his attention to detail and his dedication to ECFLA/WDLT.

I barely nicked the bark of a man with as many layers of thoughts and intentions, as the rings of an old oak. Thanks, Bob. We will miss you.

All these things and many more were Bob. They are also the essence of ECFLA. The things he cherished and devoted so much of his life to will live on through the people and activities of the organization. Thanks, Bob. We will miss you, yet we are surely thankful you were here with us for a while.

This article originally appeared in the December 2002 ECFLA/WDLT Newsletter. A memorial fund has been established to honor Bob Smith, who selflessly dedicated himself to the Eastern Connecticut Forest Landowners Association and Wolf Den Land Trust. Bob was the secretary and historian of the organization from 1988 until his death in 2002. He was also an avian architect, building thousands of bluebird and bat boxes that the ECFLA sold at fairs and events. He organized displays for fairs, and organized the annual Christmas tree sale.

He was a friend of the forest, steward of the land, and caretaker of the environment, cutting trails, labeling trees, assisting in forest management, and cleaning up trash. He was, without question, one of the most consistent, productive, and dedicated volunteers any organization has ever been blessed with.

In honor of the difference he made, a bluebird trail dedicated to Bob Smith has been established at the closed Woodstock Landfill in Woodstock, CT.

Tax deductible donations (with a notation that your gift is designated for the Memorial fund) can be made to: