Joe Brumbach (1915-2007) was a meteorologist who spent most of his career with NOAA. From 1957-1973 he served as the Connecticut State Climatologist 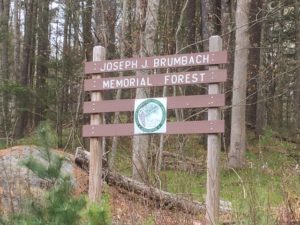 based at the University of Connecticut. A World War II Army veteran and Air Force Reserve Officer, he was the recipient of numerous professional awards including the Department of Commerce Bronze Medal for meritorious authorship in 1963. He also authored numerous publications and books, including the Climate of Connecticut, published by the Connecticut Geological Society. In 2006, Joe worked with Wolf Den Land Trust Chairman Dave Schroeder, a longtime colleague at UConn, to gift this property to us and fulfill his desire to see his forest permanently protected.

The parcel was previously owned by Myron Hatfield, an early Connecticut forester who served in the CT Conservation Corps, and spent most of his career with the Connecticut Department of Parks and Forestry. Myron planted red pine, white pine, spruce and larch on the property in the 1940’s and 50’s, some of which remain to this day. In the northwest corner of the parcel one can still find old red cedar stumps which Myron girdled (purposely killed) with an ax to thin the young forest and make room for more valuable trees to grow.

THE FOREST: The Brumbach Memorial Forest is a 22-acre rectangle on the west side of Route 198 in Eastford. It abuts several hundred acres of privately owned, permanently protected forest to the west. While it is open to the public for hiking, bird watching, etc. there are no maintained trails and parking is difficult as the frontage is steep and on a 50 MPH state highway. It is mana 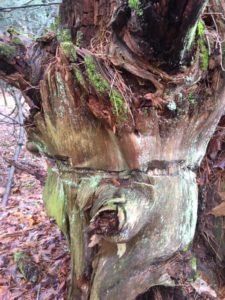 2. Remnants of an eastern red cedar that was girdled (purposely killed with an ax) by former owner Myron Hatfield in a timber stand improvement operation over 60 years ago.

ged for biodiversity, habitat diversity, and long-term timber income to further the mission of ECFLA.

DIRECTIONS: The Brumbach Memorial Forest is in Eastford on the Eastford/Woodstock town line, on the west side of State Route 198.