George Cloutier (1922-2013) was a WW II Navy veteran and a professional forester who owned and managed this forest for nearly 50 years. He got his start in forestry planting trees and doing other forestry-related work for James L. Goodwin at what is now the Goodwin State Forest. 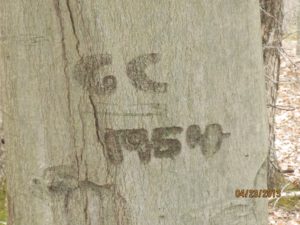 George Cloutier’s initials, which he carved into a beech tree on the northern boundary of the Cloutier Memorial Forest in 1954 – still visible in 2019.

George received a bachelor’s degree in forestry from UConn in 1949 and spent 28 years working in various capacities for the Connecticut Park and Forestry Department (later the DEP Division of Forestry). After retiring he operated his own forestry consulting firm for several years, and taught tree and shrub identification (dendrology) at UConn.

George loved hunting and fishing but managing his tree farm was truly his labor of love. He cultivated many species of trees including hybrid chestnuts and black walnuts and was well known for sharing the nuts with others who wished to plant them. George hosted numerous educational tours of his tree farm over the years, and was a co-founder and charter member of the Connecticut Christmas Tree Growers Association. He was named Connecticut Tree Farmer of the Year in 1995. At his request, in 2013 George’s ashes were spread on the banks of Mansure Pond near the northern end of the forest.

THE FOREST: The Cloutier Memorial Forest is 105 acres and includes two small ponds and a network of well maintained woods roads for hiking, bird watching etc. In 2017-2018 three years of drought and gypsy moth defoliation caused a devastating amount of tree mortality in the canopy, necessitating an intensive salvage harvest in 2019. The harvest was well managed by Hull Forest Products and numerous white pine and other seed trees were successfully maintained to help populate the next generation forest. It will be fascinating to watch the new forest develop over the next several years.